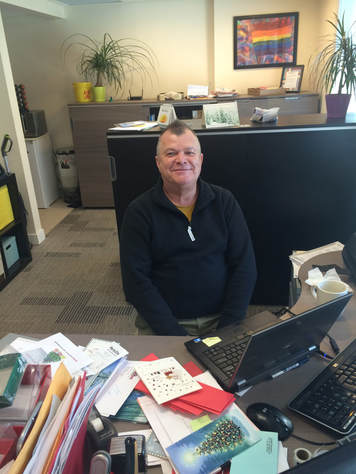 ​My name is Tim, and I have been volunteering with the SHARP Foundation, for the last 19 years. My introduction to SHARP was when a good friend of mine, Michael, passed away in the care of Beswick House.  I became good friends with Michael's family which carries on today; I was even asked to be a Godparent to his sister's son.  Shortly after Michael passed away his sister, Bonnie, became the Board President and she asked me if I would be interested in joining the board. I told her that I would sit in on a meeting, and see if this would be something I would like to do. Well, after the meeting I said that I would love to join and help out where ever I could.


I was on the Board for 8 wonderful years, but sadly, I felt that the organization needed to move forward however others didn't. Times were changing and the needs of the residents were changing.  I was there to help the residents have a better life, either just sitting, and listening to their stories or playing board games, or watching football games. I became an active volunteer, building lasting friendships and memories.  I do remember one of the residents as we did grocery shopping for Beswick House for two years, and she would know we there because she would hear us and she yelled out, Tim is that you? She had to show me her nails, she just had done. For me it has has been the best 19 years of my life. I have been helping out with fundraisers, doing the Walk for Life, Deep Roots, Bowls for Beswick, helping out at Carlye Commons with the Thanksgiving and Christmas dinners, Stampede breakfast, painting the wall with some families from the building, going to performances which is put on by the ISCCA, as SHARP has been one of there charities, for most of those 19 years.


It has been very rewarding for me, as I LOVE to shop and I have over the years been asked to do Christmas shopping, putting the gifts together with some of the MAC girls. One year I went and bought all gifts for Christmas for the residents of Beswick. I love to get into the racks looking for deals and can spend hours doing that. But what I love more is how my passion can bring smiles to the residents faces.